At the junction of San Pablo and Solano in Albany there was a somewhat mysterious place called The Lucky 13. “Lucky 13” was the tag for a popular Oakland soul station (KDIA 1310 AM), and the Lucky 13 was an after hours teen club, only open between 2-6 am. East Bay soul groups (like Tower of Power) would play there, promoted by the radio station, but the history of this venue has been very hard to unravel - so any memories would really help out.
Posted by The Yellow Shark at 11:24 11 comments: 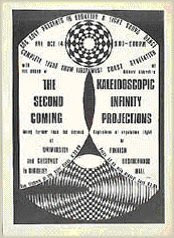 The Finnish Brotherhood Hall was a small hall just West of downtown, on Chestnut off University Avenue (University Avenue runs from San Francisco Bay to the Campus). Again only a handful of shows took place - Country Joe and The Fish, The Wildflower came over from the City and the short-lived but historically significant Melvin Q Watchpocket palyed. On May 21, 1967 the Finnish Brotherhood Hall hosted a Benefit for the Berkeley Free Press. A number of local bands gave their support: Country Joe and The Fish, Loading Zone, Ulysses S Crockett and his Afro Blues Persuation, Motor, Cleanliness and Godliness Skiffle Band and Haymarket Riot. Today, the Finnish Brotherhood Hall is still used as a community resource with regular meetings, dance classes etc.. It would great to hear some more about those shows in the mid sixties.
Posted by The Yellow Shark at 11:01 4 comments: 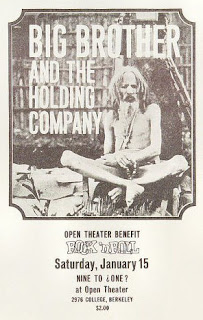 The Open Theater, at 2976 College, was a venue for “Happenings” that would now be called Performance Art. The directors were a Berkeley Drama School dropout named Ben Jacopetti and his wife Rain. Among their innovations were a light show that featured significant (if arty) nudity. When the performers auditioned for Tom “Big Daddy” Donahue’s psychedelic nightclub Mother’s on Broadway (home of Carol Doda and numerous topless clubs), Donahue rejected the show for having too much nudity. 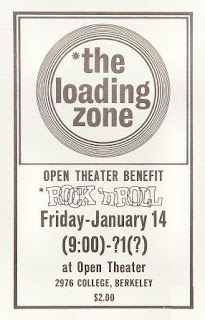 Berkeley comedy duo The Congress of Wonders got their start as part of the Happenings and Gary “Chicken” Hirsch (later in Country Joe and The Fish) sometimes played in the house jazz group. George Hunter and Alton Kelly artwork graced the lobbies. Thus the fact that Big Brother’s first public show (on January 15, 1966) was a benefit for the Open Theater seems only fitting. Charles Perry in his book Haight Ashbury - A History (Vantage 1985) has a brief but excellent history of the Open Theater.
Posted by The Yellow Shark at 09:28 No comments: 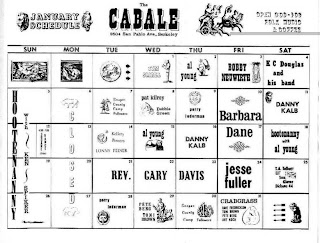 The Cabale, at 2504 San Pablo Avenue (at Dwight), was a folk club founded in late 1962 by Rolf Cahn and Debbie Green (two Cambridge, MA folkies) along with Howard Zeem and Red Dog alum Chandler A. Laughlin III (later known as Travus T. Hipp). Cahn had previously owned the Blind Lemon at 2362 San Pablo.

The Cabale opened to the public on January 4, 1963 and ran until mid-1965, when the folk action moved to the Jabberwock. Somewhere along the way Carroll Peery, manager of the Chambers Brothers and Big Mama Thornton, happened to acquire a majority interest in the Cabale. Jesse Cahn, son of Cabale founder Rolf and folksinger Barbara Dane, recalls "I was the one who cleaned the johns and swept up and practically lived there until 1965 ...". Jesse went on to play with Tongue & Groove (with Lynne Hughes and Michael Ferguson) and the Chambers Brothers. After some time on the East Coast he returned to manage the Jabberwock for Bill "Jolly Blue" Ehlert when he moved across to San Francisco to run the Matrix. The name of the venue was changed from the Cabale to the Cabale Creamery in August of 1964.

Banjo player extraordinaire Sandy Rothman has written a brief but excellent memoir of the Cabale as part of a project on the great Clarence White, and Jorma Kaukonen recorded his album "Cabale Creamery" here in 1964. 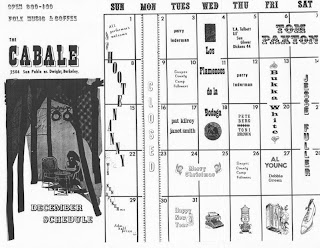 When the Cabale finally folded, probably sometime in the summer of 1965, the 2504 San Pablo premises briefly became The Good Buddy then Caverns West before being taken over, by Terry Sullivan and Tony Sage, and re-opened as the Questing Beast on November 19. Subsequently it became Tito's and the Longbranch. Today the building houses a business called “Good Vibrations” (more Duracell than the Beach Boys).

Given how pivitol the Cabale was to the Bay Are folk music scene, very little has seemingly been written about it. Memories are scarse so any input we can get is good input.
Posted by The Yellow Shark at 09:00 3 comments: