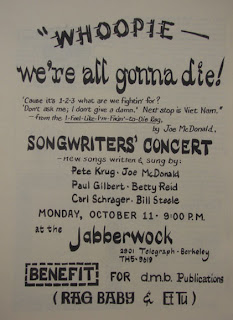 A Topical Song Workshop and Concert performed as a benefit for DMB Publications - Rag Baby and Et Tu. Whilst Joe McDonald had already been given the moniker Country Joe by ED Denson, he was still playing regular acoustic sets under his own name. Rag Baby is Country Joe’s own magazine and record label and both still run today; albeit the magazine is now in electronic form has remained a work in progress for the past few years. Rag Baby Records continues to release albums by both Joe and a few others. Et Tu was a short-lived magazine that Joe McDonald edited whilst in Los Angeles. The first issue came out in August 1964 shortly before he headed to the Bay Area to become a beatnik.

Advertised in Issue 2 of Rag Baby as a songwriters' contest, the following review appeared in Issue 3 (the fourth and final issue of the original Rag Baby magazine). It was written by Paul Armstrong: Hoot MC, Instant Action Jug Band member and for the first six months of 1966, a member of Country Joe and The Fish. I have left Paul’s words unmolested.

When I listen to a performance of a song, I'm listening hardest for some indication of where the performer is at. Song content and song de- livery are inseparable for me. What I'm looking for is some kind of communication between us. Of all the ways of presenting a song, the most meaningful for me occurs when the singer, honestly and deeply moved, rises up without a shadow of embarrassment and proceeds to exhibit himself to my cold and glazed eye. That’s when I usually feel kinship with him. And, strangely enough, the more personal the song, the stronger, deeper, and more intense is this feeling. Correspondingly, the more remote the distance between singer and song, the more remote the distance between singer and me.

I offer all this not as argument, but as statement - it seems that the same principle applies to criticism. In this light the topical songwriters’ con- cert at the Jabberwock last week caused the following two reactions in me: first, I liked most the singers - songs with whom I felt the strongest kinship, as outlined above. Second, as it turned out, the material of these singers was the vast personal of all. (Before starting on a dissection of individual performances, however I’d wish to offer a speculation. Speculation: why does every modern songwriter I ever heard feel the urge to write a song of the you-know-I-love-you-but-dear-me-I-got-to-ramble-babe genre? All the male singers at the Jabberwock concert had a song of this nature, and Shrager had two. Krug's was the worst and MacDonald's the best in a very slow race. Nevertheless, Joe should sell his to Sonny & Cher and then support us all for a year.) 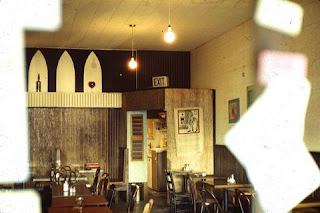 Bill Steele's songs appealed to me the least; however, his performance of them raises them up to an honorable level. He seems to possess that rare talent which is the ability to laugh at one-self. He has a fine sense of the Ironic absurdity of his (whose?) position, and when he cracks up in the middle of a song I crack up along with him. I've heard him referred to as the “Pete Seeger of Marin County,” but the Wally Cox of Sausalito would be more appropriate.

Betty Reid's songs were by far the most introspective. Several had political tones with overtones of social criticism, but what I liked best was the way these songs go beyond this level to something else. Mrs Reid spoke of them as "something made up in my head," an old-fashioned Walnut Creek expression which no doubt refers to what we Berkeley moderns would call "thought dreams." She did one song about her musings after her child had left for school in the morning, which is ostensibly the thoughts of a worried mother thinking of the fate of a brown-skinned 6-year-old out on his own in the middle of Walnut Creek on a weekday. But out of her lonely questioning comes something more for all of us. Mrs. Reid's style goes even farther beyond the borders of modern "topical" singing - with jazz chording on the guitar and progressions that will demand much more musicianship of the folkie of the future. (When you start hearing minor ninths on KYA you can say you read about it first in Rag Baby.)

Peter Krug's style, by way of comparison, is neo middle-Dylan and the words of several of his songs are also evocative of the ravings of last season’s Dylan. But, like Dylan. Krug seems on the verge of bigger and better things. At his worst, he's pretty bad. "Talking LSD" is really an abominable song (to say nothing of its being a misrepresentation of the facts), and “Empty Highway" is another poor man’s “Hard Travellin." However, Krug seems well aware of their shortcomings. "Johnny’s Gone in the War" is a pretty good song melodically. The best was "Fire In The City," also socially oriented, but I liked it be- cause Krug is here starting to go beyond the social to more personal issues. The problem in the song is the melody, which ought to be two melodies, for a lot of the song's effectiveness was lost, on me anyway, while I held my breath as the singer struggled across the bridge from one part to the other. Listening to Krug I get a real sense of ambiguity. Not the same kind of ambiguity I get from, say. "Mr Tambourine Man, " but rather an ambiguity of the singer's purpose. His songs seem to be objectifications of his inner feelings, and in the process of objectifying something is lost. What I’m trying to say is that I'm in the dark as to where Krug is at, and I think that maybe he is too.

(I might add that writing about Krug was difficult for three reasons. First, I heard him a lot during the week after the concert, and found myself liking the songs more. Second, I watched the faces of a large group of VDC marchers as they listened to "Fire In The City," and lastly, all week long Rag Baby's editors were asking me such indirect questions as, "Just what is It about that song that you don't like, Paul?").

Gary Rusch was a surprise, a relief, a ray of optimism. In the first place, he really is from the south. His songs are mostly blues-based with good melodies and fine lyrics. His rambling highway song is called - hallelujah - "Bright New Highway," and instead of "I Can't Find No Satisfaction”, he sings, “When I'm Satisfied." He says he's interested in "breaking every chain that ever bound me, forgetting my old lonesome lullaby..." which is a hell of a lot better way of dealing with loneliness than to cram it down the throats of captive listeners who undoubtedly have hang-ups of their own. Rusch doesn't fall prey to that modern disease which Is to confuse loneliness with aloneness and to blame the former on the latter. "A lie ain't no better when it's sung,” says Rusch, and that's hitting the nail right on the head.

Carl Shrager, fortunately, is fines performer; he really knows how to do that thing with an audience. I heard him do Krug's "Talking LSD" a few nights later, and he brought it off well. His own "Talking Hitchhiker” is filled with all the standard hitchhiking clichés, but. I still like it after three listenings. He has a nice touch for lyricism in most of his songs (with the rather blatant exception of “The Desert"), and the subject matter is pretty good, but he’s much better as performer than as composer. His “experiments" for guitar are nice to listen to, but they bear about the same relationship to real guitar experiments of the kind that Robbie Basho is doing, for instance, as does the Gilbert Chemistry Set Company to Sandoz Laboratories. 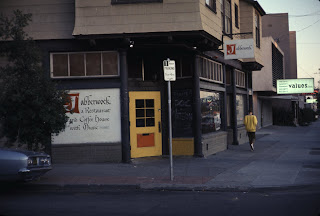 Joe McDonald was the star of the concert in several ways. Along with Rusch, he is the only singer with enough knowledge about traditional folk music to call himself a folk-singer. (He's the best ragtime singer I've heard in this area.) He also can work an audience, and is the most tied up with song writing on a full time basis of any of the singers. He’s involved on a social level, but doesn’t seem to confound the outer issues with the inner ones. He writes some good melodies, and lyrics like: "sittin' here wonder-in' will a matchbox hold my brains?" Some of his songs are pretty sentimental, but he seems aware of this himself. As if to prove this point, he walked off stage leaving the last chord progression of "Tell Me Where You're Bound" unresolved, which in turn left me unresolved for the rest of the night. A lot of his more personal songs seem concerned with the problem of memories and the past, and he doesn't seem to have resolved these questions as well as Rusch has. In one song he says that: "things done before have no ending, “but for the most part when he sings of the past, it's with a tone of nostalgia. He also does some fine bawdy material, an area of protest that hardly anyone touches on. His songs are good now and I think he's on the verge of some really fine ones.

P. S. Two days later Ale Eckstrom, who wanders around the west in the house he built on the back of a '38 Chevy dump truck, dropped into the Jabberwock with his concertina and played a song he wrote called "Deep Water." It put all of the above to shame.

Paul Armstrong
Posted by The Yellow Shark at 23:57 No comments: