The following article first appeared in the Berkeley Barb Volume 4, Number 10 (Issue 91, May 12-18, 1967).
(Mr. Thompson of New Jersey asked and was given permission to extend his remarks at this point in the Record and to include extraneous matter.)

This was very good news to me, since I have been extremely concerned over the serious increase in the use of hallucinogenics of youngsters. Apparently, it was not enough for this generation of thrill seekers to use illicit LSD, marijuana, and airplane glue. They have now invaded the fruit stand.

The implications are quite clear. From bananas it is a short but shocking step to other fruits. Today the cry is "Burn, Banana, Burn." Tomorrow we may face strawberry smoking, dried apricot inhaling or prune puffing.

What can Congress do in this time of crisis? A high official in. the FDA has declared: Forbidding the smoking of material from banana peels would require congressional legislation. As a legislator, I feel it my duty to respond to this call for action. I ask Congress to give thoughtful consideration to legislation entitled, appropriately, the Banana and Other Odd Fruit Disclosure and Reporting Act of 1967. The target is those banana smoking beatniks who seek a make believe land, "the land of Honalee," as it is described in the peel puffers' secret psychedelic marching song, "Puff, The Magic Dragon."

Part of the problem is, with bananas at 10 cents a pound, these beatniks can afford to take a hallucinogenic trip each and every day. Not even the New York City subway system, which advertises the longest ride for the cheapest price, can claim for pennies a day to send its passengers out of this world.

Unfortunately, many people have not yet sensed the seriousness of this hallucinogenic trip taking. Bananas may help explain the trancelike quality of much of the 90th Congress proceedings. Just yesterday I saw on the luncheon menu of the Capitol dining room a breast of chicken Waikiki entry topped with, of all things, fried bananas.

An official of the United Fruit Co. daring to treat this banana crisis with levity, recently said: The only trip you can take with a banana is when you slip on the peel.

But I am wary of United Fruit and their ilk, because, as the New York Times pointed out, “United stands to reap large profits if the banana smoking wave catches on."

United has good reason to encourage us to fly high on psychedelic trips. And consequently, I think twice every time I hear that TV commercial: "fly the friendly skies of United." 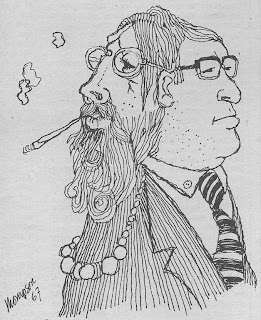 But let me get back to what Congress must do. We must move quickly to stop the sinister spread of banana smoking. Those of my colleagues who occasionally smoke a cigarette of tobacco would probably agree with the English statesman who wrote: The man who smokes, thinks like a sage and acts like a Samaritan.

But the banana smoker is a different breed. He is a driven man who cannot get the banana off his back.

Driven by his need for bananas, he may take to cultivating bananas in his own backyard. The character of this country depends on our ability, above all else, to prevent the growing of bananas here. Ralph Waldo Emerson gave us proper warning: Where the banana. grows, man is ... cruel.

The final results are not yet in, however, on the extent of the banana threat. An FDA official has said that. .judging from the four years of research needed to discover peyote's contents; it will probably take years to determine scientifically the hallucinogenic contents of the banana. We cannot wait years, particularly when the world's most avid banana eater, the monkey, provides an immediate answer.

We can use the monkey as a laboratory, seeing what effects bananas have on him. The FDA says it cannot tell if a monkey has hallucinogenic kicks; they think not. The problem, I feel, is seeing the monkey munch in its natural habitat. To solve this dilemma, I propose the Peel Corps, necessarily a swinging set of young Americans capable of following the monkey as he moves through the forest leaping from limb to limb.

On the home front, I am requesting the President to direct the Surgeon General to update his landmark report on smoking and health to include a chapter on banana peels. In the meantime Congress has a responsibility to give the public immediate warning. As you know, because of our decisive action with respect to tobacco, cigarette smoking in the United States is almost at a standstill. This is because every package of cigarettes that is sold now carries a warning message on its side.

Therefore, I propose the Banana. Labeling Act of 1967, a bill to require that every banana bear the following stamp, "Caution: Banana Peel Smoking May Be Injurious to Your Health. Never Put Bananas in the Refrigerator."

There is, of course, one practical problem with this legislation: banana peels turn black with age. At that point, the warning sign becomes unreadable. It may be necessary, as a consequence, to provide for a peel depository, carefully guarded to protect the public from aged peels. I am now requesting of the Secretary of the Treasury that, given the imbalance of the gold flow, some of the empty room at Fort Knox be given over to such a peel depository.

As with any revolutionary reform movement, I expect the forces of opposition to be quite strong. One only has to look at the total lack of Federal law or regulation relating to bananas to realize the banana lobby's power. We have regulations on avocados, dates, figs. oranges, lemons, pears, peaches, plums and raisins. But bananas have slipped by unscathed.

What we need across the length and breadth of this great land is a grassroots move to ban the banana, to repeal the peel. Howard Johnson's can survive with only 27 flavors. And what is wrong with an avocado split? I will only breathe easier when this country, this land we love, can declare, "Yes, we have no bananas; we have no bananas today."